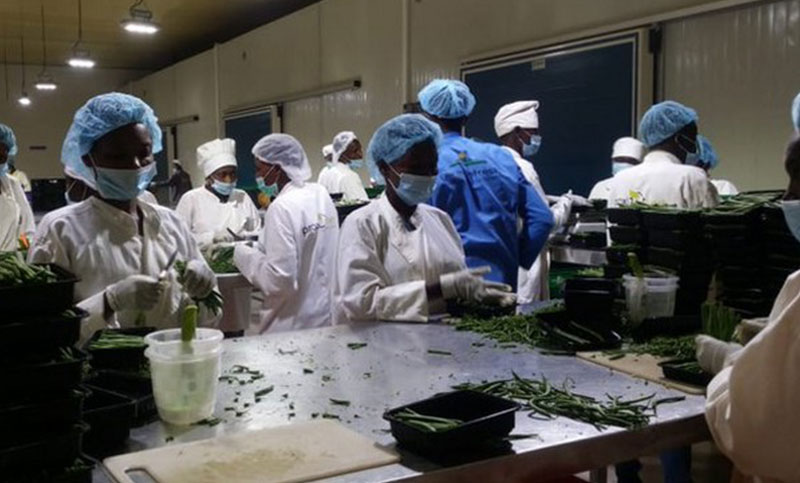 In the last year’s national dialogue – Umushyikirano, Eugene Mukeshimana a Chili pepper farmer in Bugesera district in Eastern Province brought his case to the attention of President Paul Kagame.

The upcoming farmer told the President that in the previous season he lost Rwf800, 000 due to lack of storage facilities that affected the quality of Chili before it was exported to Europe.

Mukeshimana said the loss was due to lack of storage facility which was earlier communicated to Ministry of Agriculture to no avail.

The president understood the missing link and right away directed the Ministry of Agriculture to compensate the farmer.

Mukeshimana, like other farmers who had this storage challenge could be getting an answer.

The National Agricultural Export Development Board (NAEB) has launched ‘horticulture pack house’ worth Rwf980million for grading, packing and protecting flowers, vegetables, and fruits before they are exported to the international markets.

The ‘Horticulture pack house’ is the only public standard facility for handling fresh flowers, fruits, and vegetables certified by Hazard analysis and a critical control point (HACCP) in the country.

This ‘Packhouse’ is divided into three operating departments including a surface area of 500 square meters with 36 tables used in sorting vegetables and fruits before they are packed and put in the cold rooms. The surface area has the capacity to accommodate 150 daily workers who grade fruits and vegetables.

The packhouse inaugurated at the NAEB headquarters on Wednesday 26 in Kigali city aims at reducing losses from exporters and maintaining the quality of vegetables, flowers, and fruits before they reach markets.

“This horticulture packhouse helps to fill the gap between the existing horticulture collection centers and cold room at the airport by providing proper handling of fresh produces. It is used as sorting, grading and packing of the export products before they are transported to the airport,” Amb. George William Kayonga, Chief Executive Officer of NAEB said.

“It will also help to improve the quality and safety of exported products to meet international market requirements.”

Public Horticulture house pack started operation in 2017 with phase one consisting of three cold rooms. Today, the second phase has been completed with the fourth cold room.

The facility operates 24/7 with 16 exporting companies. On a weekly basis, 50 to 100 tons of fresh fruits and vegetables are handled and these include French beans, avocados, karela, chili varieties, snow peas, broccoli, okra to mention but a few.

According to Kayonga, The ongoing process of certification of the facility in accordance with international food safety and management standards will increase consumer confidence in Rwandan products.

At the launch of horticulture ‘house pack’ Vianny Kabera, an exporter said, “This is a big solution to the horticulture sector because exporters can guarantee quality before exporting his/ her goods. Horticulture is not like other businesses when fruits or vegetables dry that is a loss, so keeping them fresh is a solution. ”

“It is very costly for an individual to build a house pack, few people can afford it, but the government has brought a problem, I hope this will increase export revenues,”

According to exporters, the house pack comes as a solution, but more should be built to meet the growing number of people who are venturing into horticulture exportation. So far there are about 30 exporting companies from three in 2016.

The criterion followed before being allowed to channel horticulture exports to the public house pack include visiting the gardens where the produce is grown, assessing the quality of the product and paying a contribution of about Rwf50 per kilogram of the product to NAEB.

The launched horticulture was built in collaboration with NAEB, World Bank and HortInvest project, a Netherlands agriculture promotion oriented project.

“Horticulture House pack has promoted exports in European countries; hope this will also serve the same purpose in Rwanda. Having quality goods produces on the international market is key.” Ton Negenman, First Embassy Secretary of the Embassy of the Kingdom of the Netherlands for Economic Affairs said.

Anothe public house pack will be built in the Bugesera district. So far two hectares of land has been procured for the facility. This land is adjacent to Bugesera international airport, currently under construction.

Available figures from NAEB indicate that in 2019, the country exported 41,802 tons worth $30million of horticulture products up from 30,116 tons worth $24million in 2018, meaning an increase of $6million.