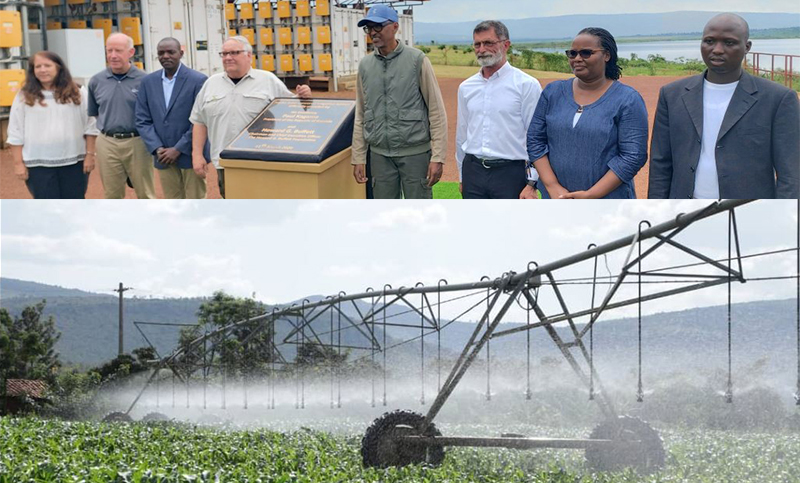 The Howard G. Buffet Foundation in partnership with the government of Rwanda on Wednesday launched a state-of-art irrigation project in Estern Province.

The Nasho Irrigation Scheme Project worth $39 million in Kirehe District has been operating since 2017.

It also consists of a solar power plant with a capacity of 3.3 MW to power the irrigation system, with 2.4 MW battery.

Beneficiaries of the project are grouped into a cooperative; Nasho Irrigation Cooperative (NAICO) based in Nasho sector, which utilize and maintain the infrastructure.

Additionally, 144 houses (36 houses that are four-in-one) were constructed to resettle households from areas under pivot irrigation, and farm buildings.

The project intends to improve on-farm productivity of crops through investments in proper land, water, and inputs utilization for enhanced food security among Rwandan farmers.

It will also ensure access to and adoption of technologies that enhances agricultural value chains.

Howard Buffet, the son to Warren Buffet, a great friend of Rwanda, has various projects financed by his foundation, the Howard Buffet Foundation.

Howard donated $500 million to Rwanda in 2017 to support agriculture and other initiatives.

He regularly visits the country to catch up with the progress on ground.

According to his foundation, the vast projects will help Rwanda shift from subsistence to commercial farming.

The country also targets over 8% agricultural growth every year.

Rwanda is already preparing a site that will host Africa’s finest Agriculture Institute.

It will help bridge skills gaps in the country’s agriculture sector.

The institute project is directly supervised by Rwanda Agriculture Board (RAB).

Penn State University in US was contracted to carryout planning and design of the institute expected to boost Rwanda’s College of Agriculture and Veterinary Medicine.