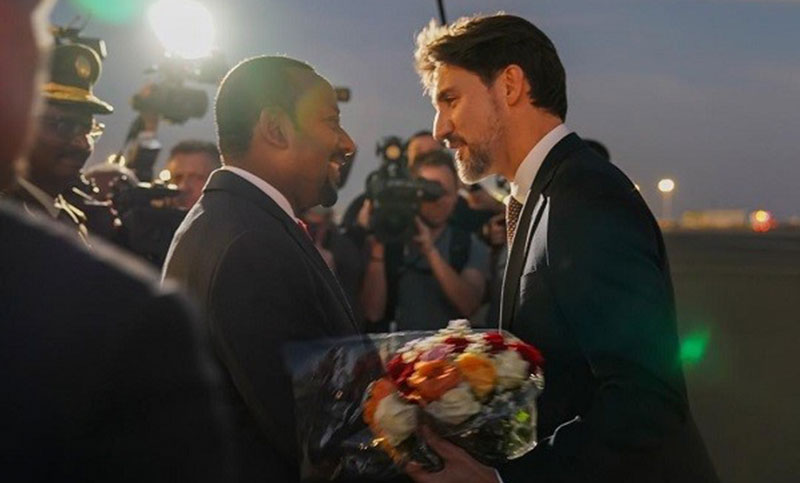 The visit focused on how Canada, Ethiopia, and African countries can partner in our shared commitment to democracy, women's empowerment and gender equality, fighting climate change, and economic growth that benefits everyone.

While meeting with Ethiopian Prime Minister Abiy Ahmed and President Sahle-Work Zewde, Prime Minister Trudeau discussed how the two governments can work more closely together to advance democracy and gender equality, find innovative solutions to climate change, and increase trade and investment between our two countries. Canada believes that advancing these shared priorities helps both countries and regions grow.

To strengthen our economic partnerships, the Prime Minister was joined by a Canadian trade delegation and the Minister of Small Business, Export Promotion and International Trade, Mary Ng. Prime Minister Trudeau and Minister Ng committed to growing trade and investment for businesses in both countries and developing better access to each other's markets. The Prime Minister was also joined by Masai Ujiri, who has helped advance Canada's interests on the continent through his longstanding relationships in Africa and his work to empower youth, by promoting sport with his organization Giants of Africa.

In addition to making important investments to fight climate change and promote gender equality, Canada will provide funding for the National Electoral Board of Ethiopia to empower voters and candidates, and strengthen democracy. Canada also welcomed Ethiopia as a member of Canada's Military Training Cooperation Program, which delivers military training to member countries and helps build their security capacity.

The visit to Ethiopia coincided with the 33rd African Union (AU) Summit. As the first Canadian Prime Minister to attend AU Summit events, Prime Minister Trudeau met with other world leaders to explore how Canada can help advance their common vision for a more integrated, prosperous, and peaceful continent. This work is particularly meaningful to Canada as Chair of the United Nations Peacebuilding Commission in 2020.

During these events, Prime Minister Trudeau announced support for the African Union Commissions' efforts to advance gender equality. Through investments, Canada will help increase economic opportunities and address barriers for 150,000 women in East Africa. Other investments will help provide leadership training to 200 youth leaders and support for entrepreneurs and small and medium-sized businesses in Ethiopia, with a focus on those owned by young people and women. When women around the world succeed, so does our global economy.

The Prime Minister attended events focused on how empowering women and girls is key to addressing many other issues, including poverty and inequality. He announced funding to promote sexual and reproductive health and rights of women and girls, and to combat sexual and gender-based violence.

Prime Minister Trudeau also underlined how building an economy that works for everyone depends on our ability to adapt to and combat climate change. He announced that Canada will co-host the first ever Canada-Africa Clean Growth Symposium, in Addis Ababa, in 2021. The symposium will explore innovative ways to grow our economies while reducing emissions and building resilience to a changing climate.

While participating on a panel about the potential of Africa's blue economy, which focuses on using ocean resources to unlock economic growth, create jobs, and reduce poverty, the Prime Minister highlighted how Canada is working with others to build a more sustainable ocean economy, at home and abroad. This work builds on the leadership Canada demonstrated as the 2018 G7 Presidency and as co-host of the 2018 Sustainable Blue Economy Conference in Kenya. Canada believes that countries need to work together to protect coasts and coastal communities, support sustainable oceans and fisheries, and clear up ocean plastic waste, to create economic growth.

Throughout the visit, Prime Minister Trudeau positioned Canada as an important partner for Ethiopia and Africa. He demonstrated Canada's readiness to work with the continent to address global challenges, and build a better, more secure, and more prosperous future for Canadians and Africans.